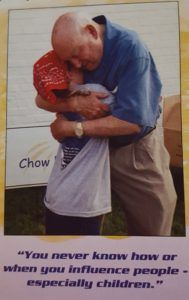 Compassion is “a feeling of deep sympathy and sorrow for another who is stricken by misfortune, accompanied by a strong desire to alleviate the suffering.” (www.dictionary.com). The etymology of “compassion” is Latin, meaning “co-suffering.” Compassion involves “feeling for another” and is a precursor to empathy, the “feeling as another” capacity for better person centered acts of active compassion; in common parlance active compassion is the desire to alleviate another’s suffering” (Sherlyn Jimenez, see article on Compassion, The Encyclopedia of Positive Psychology, Volume I, Editor: Shane Lopez, Wiley-Blackwell, ISBN 978-1-4051-6125-1).

“It is a word often misunderstood. Many people think that to be compassionate means to give money to those in need, or to hug someone when they are feeling down. Those are aspects of compassion, but compassion is more than that. It is entering into someone else’s pain, suffering or hardship with them. It is stepping into their circumstances and providing comfort, assistance, or both” (Heart of a Champion Character Development Program, Volume 3: Compassion, p.3).

Jesus said, “Greater love has no man than this, that he lays down his life for a friend” (Jn. 15:13). If we are to be the men God wants us to be, we must be willing to lay down our own needs and desires to reach out to others who are in need of our compassion? Are you willing to do that? Please consider some areas where we must demonstrate compassion and some outstanding examples in each of these areas.

Mike Magusiak was an executive at CEC Entertainment, Inc. (Chuck E. Cheese) for nearly 27 years. “When Magusiak initially joined CEC Entertainment in 1987, the Irving-based company was facing a negative cash flow and needed a turnaround. By 1989, with Magusiak as chief financial officer and taking CEC Entertainment public, the company began returning profits once again. In 2008, Magusiak was named CEO of the company and served until 2014 when it was sold to a private equity group. Magusiak also served on the board of directors from 1988 to 2014. The annual compound growth rate of CEC Entertainment, Inc. stock from 1989 to 2014 was 18.6 percent” (https://udallas.edu/cob/cob-news/Chuck_E_Cheeses_CEO_Joins_Faculty.php).

In his leadership position, he had a great deal of responsibility that required job commitment. But Mike determined early in his career that he would not allow his career to stand in the way of spending quality time with his family, making it clear which one he loves more.

In an interview that appeared in the March 2013 issue of D Magazine, Mike described the valuable time he spent with his family. “Wendy and I have been married for more than 30 years. We are blessed to have three sons. Jason, 24, is a CPA working for KPMG; Matt, 23, is a senior at Ole Miss who will graduate next semester with a double major in accounting and marketing; and Nick, 17, is a junior in high school. My wife and I spend a lot of time at ice arenas watching two of our boys play hockey. I also enjoy golfing with our middle son, and we enjoy boating as a family. Every Halloween when our boys were young, my wife would take them next door while I changed into a Chuck E. Cheese costume and I’d take them around the neighborhood to trick-or-treat. My boys never knew it was me. In fact, one year they wanted to bring Chuck E. home to meet Daddy.”

Karen Hughes was a trusted top advisor to President George W. Bush. She served as the White House communications director but in 2002 she decided to give up that position in order to spend more time with her husband, Jerry, and son Robert. Upon announcing her resignation, she said, “Throughout my career I have tried to prioritize my family while I have a career…I think this says that I can do what is right for my family, and continue to serve the President in a key way. I’ve always prided myself that this is a family-friendly White House, and I think this is a family-friendly decision.” Many Washington insiders were shocked by her decision. But Karen Hughes redefined what it means to put family first. She remained an advisor to the President, but she put her family first. She still treasures that decision, stating, “Other than marrying my husband, that decision was still the best decision I think I’ve ever made.

Krissi Holomon was a bright & beautiful teenager who died at an early age cutting short dreams of college. But she was a person known for her extreme passion. She so touched her classmates that the high school graduation was moved to her home when she was too sick to leave her bed.  The touching story of Krissi Holomon can be viewed in the HOC Foundation video at https://www.youtube.com/watch?v=XSf5WXmxCFs.

Compassion for those in need

Andrea Jaeger was a tennis prodigy who rose to the second-ranked player in the world in 1979 at the age of 14. But in 1985 her career was ended by a shoulder injury. Five years later she founded the Silver Lining Foundation in Aspen, Colorado to help children with cancer. She used her $1.4 million in tennis earning to launch the foundation in 1990.

Young cancer patients are flown by the Foundation to Aspen for a week of support and activities. Because of her experiences in high school she developed a heart of compassion for kids in need. When she was in high school, fellow-students, jealous of the attention she received as the result of her tennis prowess, would throw food at her in the cafeteria and push her into lockers.

“Jaeger’s autobiography, First Service, was published in 2004. In the book she wrote about her teenage years as a tennis player and her later decision to focus on serving God. All proceeds from the book were donated to children’s charities.

Jaeger has since established the “Little Star Foundation”, reaching on average 4,000 kids annually. She has moved from Aspen to a much larger 220-acre (0.89 km2) property in Hesperus, Colorado, where she will be able to expand her programs. [12] (https://usatoday30.usatoday.com/printedition/sports/20070309/c1scov09.art.htm)

Compassion when it costs you

Todd Wagner is a successful business man with interests in technology and entertainment, but his greatest interest is in kids. He has dedicated many personal resources to make a difference in the lives of others.

Wagner is the co-founder of Broadcast.com and founder and CEO of the Charity Network. He also co-owns 2929 Entertainment with Mark Cuban, along with other entertainment companies. Wagner has his own charitable foundation, the Todd Wagner Foundation. After meeting with Arnold Schwarzenegger, Wagner in 2001 launched his Foundation’s first children’s program, the Dallas chapter of the After-School All-Stars (then called Inner-City Games), a national program championed by Schwarzenegger that provides year-round technology, academic, sports and cultural programs for children in the nation’s inner cities. The Dallas After-School All-Stars now reaches more than 4,000 children with programs ranging from chess and art classes to golf, running clubs and math competitions.

Wagner also created a Minority Technology Fund that provides funding and resources to minority-owned, technology-focused businesses based in Dallas and has made investments in numerous companies including: Imaginuity Interactive, a Web site development firm; Abstract Concepts, developer of African-American communities Ebonymate.com and Dallasblack.com; and rocKnot, a software development firm.

Wagner has also developed the MIRACLES technology, education and life skills program that provides an after-school program for inner-city children. This program is currently in its fifth year and is operating in nine cities in conjunction with the national After-School All-Stars. The multi-year program begins in sixth grade and continues through high-school graduation. The Foundation recently made a grant that unites the MIRACLES curriculum with The Boys & Girls Clubs of America’s (BGCA) technology program “Club Tech”.

The Foundation has also provided funding to bring KIPP (Knowledge is Power Program) charter school to Dallas in 2003 and to Wagner’s hometown of Gary, Indiana in 2006. KIPP Truth Academy is a program for students to develop knowledge, skills and character.

“An old parable teaches that it is more compassionate to teach a man to fish rather than to catch a fish for him, because if he is taught how to fish, the man will be able to sustain himself throughout his lifetime. True compassion that enables sustained change requires a personal investment from us. Whether time or money, change comes at a price.  An old saying goes, ‘no pain, no gain.’ True compassion requires us to ‘consider others above ourselves. ’While difficult thing to do, there is no act that is nobler. Others need your compassion, but it may cost you – in time, money, comfort or convenience. However the results will be life changing.” (Heart of a Champion Program, Compassion, p.13).

For Cathy, it was not just about giving, but about giving in a way that enables others to succeed. Cathy believed that requires sacrificial giving – giving to others in a way that means a personal cost to him – a cost that he said is well worth it. “We must motivate ourselves to do our very best and by our example lead others to do their best as well,” Cathy said. Before his death in September 2014, Cathy said, “I’d like to be remembered as one who kept my priorities in the right order. We live in a changing world, but we need to be reminded that the important things have not changed, and the important things will not change if we keep our priorities in proper order.”

Cathy wrote five books: the autobiography Eat Mor Chikin: Inspire More People, a motivational book entitled It’s Easier to Succeed Than to Fail, the parenting book It’s Better to Build Boys Than Mend Men, an explanation of his business success in How Did You Do It, Truett?, and a final book on the significance of money in today’s society titled Wealth, Is It Worth It?. He also contributed to the anthologies What My Parents Did Right and Conversations on Success, and co-wrote with Ken Blanchard Generosity Factor: Discover the Joy of Giving Your Time, Talent, and Treasure.

Cathy was a deeply religious man and determined from the beginning of his enterprise that all Chick-Fil-A’s restaurants would be closed on Sunday. It was a decision made out of personal conviction and care for his employees. Realizing full-well that he would be forfeiting an entire day of business, he desired to give his employees a day free for rest, family time and the exercise of their faith. His business has never suffered from that decision and is carried on today by his son Dan, who became CEO of the business in November 2013 when his father retired. S. Truett Cathy died at his home on September 8, 2014 of diabetic complications at the age of 93.

Think about what it takes to demonstrate compassion in your family, for the needy, for your peers and when it costs you. What do you now know about compassion and how can you show others that you care? Now that you know what compassion means, what are you going to do to show what you know? Quite frequently in Scripture it is said that Jesus was moved with compassion by what he saw (Mt. 9:36; 14:14; 15:32; Lk. 7:13; 10:33, etc.). Won’t you be the man that God wants you to be by showing compassion like Jesus did?